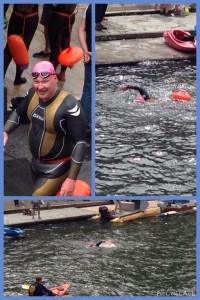 I must admit, when I signed up for bridge to bridge it was as a reluctant team member of team South West Swim but as my fellow coaches had named our Swim Smooth Coaches Ed team after my business I felt I should oblige and register.  It was not the distance that put me off, or the event format, but I have just never felt the need to swim in the Thames, after all it’s a dirty river…………….isn’t it?

The day started as with most open water events, with a nice 4am alarm call, then being on the road for 5am and a registration start time of 6am, an early morning process you get use to as a event swimmer.  When we arrived the event organisation was great, with parking a short walk from the event start and registration a breeze allowing time to relax and chat with other fellow swimmers and friends.  This relaxed atmosphere was key to the day and you could tell there was a range of swimmers riverside from the very fast to the not so fast, but the atmosphere made sure everybody was happy and welcome.   Because the event is not a race the only goal for most was swimming and completing in the best time possible for their abilities, there was no competitive atmosphere and swimming to completion was the primary goal, a refreshing change to other events.

There were three waves; 8am, 8:30am and 9am,  the slower swimmers went off first and the faster swimmers went last which was a great starting process.  In each group there were three (I think) individual pacing groups, the idea behind this was that the swimmers swam in pods. This system worked very well for those that wanted a paced swim and more of a social swim.  Before the event I had not even contemplated what time I was aiming to finish in so choosing a speed pod was a bit of a decision.  I choose to start with Simon Griffiths pod, the middle group of the fastest wave, on the basis that if this was too fast I could join the following slower pacing group, which is what happened.  My fellow coach Tom worked out we were swimming an average of a 1:33/100m pace throughout the 14.1km (we like numbers even when we are not racing or coaching).

The Bridge to bridge is a different format to what you may be use to; a long distance swim but a broken long distance swim at that.  This means that you swim the course in sections, having to get out several times for locks, weirs and feed stops. The first section went surprisingly quickly, as we neared the exit point I actually thought something was awry as it only felt like I had been swimming for 30 minutes! however a check of the watch indicated just under an hour had passed. 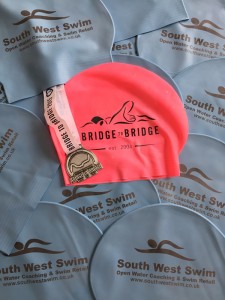 For me the stops, although necessary to traverse the river obstacles, were my least favourite part of the event.  I always prefer just getting on with it and feeding in the water quickly,  however on the flip side the stops allowed me to try different things in each section, treating each part as a different swim.  The bridge to bridge event was always a big part of my training plan for my Windermere end to end swim in September so the setup was actually of great benefit to me.   This allowed me to try different stroke rates and pacing, knowing that if something didn’t work I would have a brief rest stop to “reset” myself.

At each stop you had fuel; water, sports drink, sweets, cakes etc. I mostly used my own nutrition apart from the first and last stops.  The only downside to these stops were the fact that some of the other swimmers were getting straight out and delving into the food without first washing their hands with the gel provided.  Although a small thing it was a little off putting seeing your favourite haribo bears being dripped on and I noted a few others commenting on this during and after the event.  The pink (9am) wave stops were brief, enough to fuel, regroup and get instructions to the next section.  I may be wrong but the other two waves seemed to stay at the stops a bit longer, and was a lot more social orientated, which was great to see.  I estimate that I spent about 30-40 mins at the stops (being held longer at the first one for safety cover to get in place).

If you did not want to swim in a pace group then you could swim the event solo, as long as you had a tow float.  I was using a Chillswim tow donut anyway and later into the event these proved useful (and not just for carrying my feeds).  The usefulness was actually in the fact that many, many people were wearing them so it made navigation and sighting a breeze.

For me this was a fantastic warm up for Windermere, allowing me to play with my swim, try different things, try different fuels etc. I found the first 10km extremely easy, the second to last stretch started to get a bit tough and the final stretch was a test of shoulders.  I am not sure of the flow rate of the river but I did not feel any benefit of the current during the whole swim, one of my swimmers said the event a few years ago was a lot more current assisted.

Now a special mention has to go to our pods pace swimmer (Nigel), who did an amazing job of pacing our pod, making sure everybody was ok at the end of each section and keeping us all together as a group.  I believe the sign he held up at the start indicated a finish time of just under 4 hours, I came in at a time of 4hours 3minutes including the stops, a fantastically accurate measurement considering the pacer would have had no reference points in the swim as to how fast he was going. I was happy with this time and has set me up with confidence for a good paced Windermere swim with Colin Hill. I did not get chance to thank Nigel after the event, so thank yoou Nigel for making out pod an enjoyable and challenging one to swim in.

I would highly recommend the event to those wanting something a little different, long and challenging.   This could be as their main event of the year or to those using it as part of their training plan for longer events. The organisation was first class and the safety cover was plentiful, friendly and professional. The results also speak for themselves, nearly 400 starters but only 2 people marked as DNF, that is impressive for this kind of distance event.  Some of my swimmers also swam the event and got some fantastic times and personal achievements, with positive feedback on the whole.

I’ll be back, probably in 2017 personally, but will certainly be promoting this event in 2016 within my coaching sessions and to all my swimmers wanting something different and challenging to slot into their events calendar next year.

As for that Thames river being dirty?  Certainly not the case in my experience on this stretch.  Its not crystal clear like the lakes I coach and train out of but it was certainly clear enough to make out the bottom on occasion.  Dont get me wrong though, I avoided drinking any of it and have never swam so far with perfect breathing technique.

Well done the Henley Bridge to bridge team and everybody who swam the event.

Update:  I will be back swimming this event again this year but not alone.  I will be swimming with around 20 of my Pool and Open Water squad swimmers, some taking on their first distance event, others are more seasoned in distance swimming.  It should be a fantastic day out for us all, if any more join I will need to hire a bus to get us there.  Keep an eye open for the South West Swim t-shirts and hoodies the team will hopefully be sporting. 🙂